Clay pots and clay utensils are most primitive objects of most civilizations, the processes in Nepal and India are similar, different regions of India have variations, pot making and baking are the two distinct activities, entire family participates in the making of pots, the gendered role playing is remarkable; raw clay is procured from village tanks at the end of the summer which in turn are deepened for catching more water in monsoon as a result of this activity.The ways of making pots are essentially the same, wheeling a cylinder first and then tapping the clay from outside with a taplo in one hand supported by a roundish support inside, the shape emerges as the clay expands; Dhochki, bhotvo, maantlun, mantle, lamps, flower-pots, haandli, kothi, kalaadi and even country tiles and bricks were traditionally made by the potters, a potter was honorably called Prajaapati (the keeper or the king of the people) or kumbhaar (kumbhkaar). Kilns have variations, the pots and the utensils have regional shapes responding to the needs, Thimi in Nepal is a potters’ village which gets dotted with freshly made and dried pots and then with a number of kilns, the whole village fires the pots like in the kumbharvaadaa(s) of Gujarat and Karnataka, the kilns are tended and allowed to sizzle the night over and are dismantled in the morning, pots, utensils and grain storage vats of different sizes and shapes everywhere, it is like celebrating one of the oldest crafts today. Africa had neither the potter’s wheel nor a loom which in fact tells on its coil pottery and certain weaves and width of fabric they make. Plan, section and 3-D of a down draft kiln near Morbi, Gujarat. Measured Drawn in the year 1999 by the authors’ office - ARCHICRAFTS. This kind of kilns came to India during the colonial period. It has gone through its own genesis. Shown here is an example of a working kiln and the process by which the modern kiln gets constructed. However, the process has become entirely vernacular because these modern kilns are built without any plans through the internalized knowledge that is passed on from one generation to the next. Top most are the two temporary kilns, the circular one is for baking lime and cubical one for bricks. 1 A large square used by various families of the village for making temporary kilns. One can see unbaked pots, baked pots and a fired kiln. Clockwise: 2 A street lined with baked pots that are used for distilling liquor. 3 A kiln being prepared. 4 Unbaked pots in front of a potter’s house. 1 Women collecting the baked pots and sorting out the remains of the kiln while children play. Clockwise: 2 The temporary kiln being prepared by arranging the unbaked pots. 3 A potter lady giving glaze to a pot on a wheel. 4, 5 Potters making the initial pot on the wheel and the initial pots collected before turning them into full blown ones. 6 The kiln being completed with pots and being prepared for firing. Clay pottery and bricks in make shift kilns has been a prehistoric activity of India and perhaps Asia. Image shows potters community and processes in Karnataka. 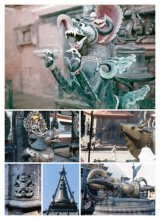